Alan Danson has composed many works for School Orchestra. Instrumental (Brass and keyboard) and class teaching from early years through Key stages 1,2,3 and 4 has always played a significant role in Alan’s work.

He believes strongly in the part music can play in the enhancement of a child’s development. His approach to composition for children is as meticulous as his work for professional orchestras and ensembles. Parts are idiomatic, demonstrating to the children the identity and character of their instrument and the part it plays in much of the orchestral repertoire.

The items below are a sample of some of the works available from the series – Making an Early Start. They were written specifically to provide young players with the opportunity to utilise the skills they are acquiring in their instrumental lessons.

The ‘catchy’ nature and character of the pieces has proved to be readily accessible and popular with childrens’ groups.

New additions to the series are a set of 5 New Works for the Young String Orchestra, varying in standard between Grade 2 to 6/7 (ABRSM).

The pieces were written by invitation for young player groups at Finchley Music Centre (part of the London Borough of Barnet Music Services).

Each work has a distinctive character, and includes the occasional (deliberate) technical challenge.

These works for School Orchestra are available to buy and download as PDF files which you can save to your computer and print the parts. They can be viewed on the New Works for the Young String Orchestra page.

Composed to provide experience of the style and character of the classical minuet. Written for an orchestra of varying standards. (Violin 1 and Guitar part for students of Grade 4-5 standard).

This work provides a feature for the trumpet players, and can also be played at a less sprightly tempo!

The recorder is given a predominant part in this work and is composed using the first 5 notes the student learns (G, A, B, C, D).

Provides children with experience of interplay with some answering phrases from one group to another.

Composed to provide children with the “geographical” skills of performing works on a grander scale, and includes many repeats and a coda sign; also included is the challenge of playing traditional ‘um-cha-cha’ off beats. 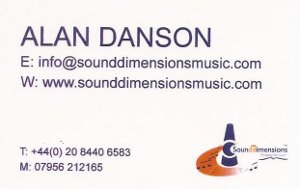